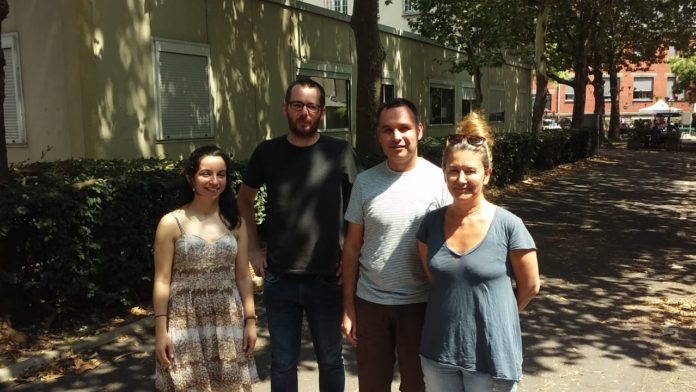 In order to give talks, seminars, participate in programs, give continuity to their research and strengthen scientific collaborations, the three main researchers of the Millennium Nucleus Physics of Active Matter -Rodrigo Soto, María Luisa Cordero, and Felipe Barra- traveled to Europe and USA, during July.

Rodrigo Soto, Director of the Nucleus, was the first week of July in Dresden, Germany, at the Max Planck Institute for Complex Systems Physics where he visited different Professor Frank Julicher’s group researchers and gave a talk entitled “Dynamics of bacterial suspensions.”
During the second and third week of July, Soto traveled to Paris, France, to the École Superieure de Physique et Chimie Industrielles (ESPCI). There, he held the seminar “Moving droplets with bacteria,” met with several students and researchers from the center and visited Professor Eric Clément, a French physicist who came to Chile last June, invited by the Millennium Nucleus, since he is carrying out a joint research with the Chilean scientists.
María Luisa Cordero, Deputy Director of the Nucleus joint Soto on this last visit to the French capital, between July 16th and 20th. “We are working with magnetotactic bacteria confined to a drop, a job that was being made in Chile by Eric and his student, Benoit Vincenti. The objective of this meeting was to achieve an advance in that investigation paper,” says Cordero.
After the collaborative work before mentioned, Soto left Paris and went to Spain, where he will be staying during this week, along with Professor Ignacio Pagonabarraga, from the University of Barcelona.

Switzerland and the United States
The Deputy Director of the Nucleus not only traveled to Paris, France to meet with Eric Clément. She also took the opportunity to meet with Agnes Maurel, of the Institut Langevin, of ESPCI, with whom she collaborates on acoustic metamaterials, together with the doctoral thesis student of the Nucleus, Camila Horvath. “Agnes makes the theory and Camila and I do the experiments. She is the co-director of Camila’s thesis,” she says. In the French capital, she also held meetings with Simón Félix of the Université du Maine, Le Mans, France, and Jean-François Mercier, of Ensta-Paris Tech.
“A week before, I went to Lausanne, Switzerland, where I visited François Gallaire, a researcher I met during my Ph.D. and with whom I intend to resume a collaboration. He simulates droplets in microchannels and I want him to help us simulate our drops in a channel,” she says.
While Soto and Cordero developed their activities in Europe, Felipe Barra was invited along with 49 other physicists from around the world to a program developed by the Kavli Institute of Theoretical Physics, of the University of California, Santa Barbara, United States.
“In the program -which included topics such as thermodynamics of quantum systems and measurement theory, among others- researchers are invited to spend a season in the institute where a conference is held and then, one or two daily talks in order to generate interaction between various theoretical physicists of the world. I was there only for three weeks; meanwhile, other researchers completed the two months of the program. There, I ran into my collaborator at the University of Luxembourg, Massimiliano Esposito and I got to know the work of physicists from Spain, Ireland, Argentina, etc. In fact, I started a collaboration with a Spanish physicist who is living in England,” says Barra.
During his stay, Felipe Barra held the talk “Thermodynamics with the (infamous) local master equation” on July 16th, within the framework of the 40 talks that were held on the program between May 29th to July 20th.