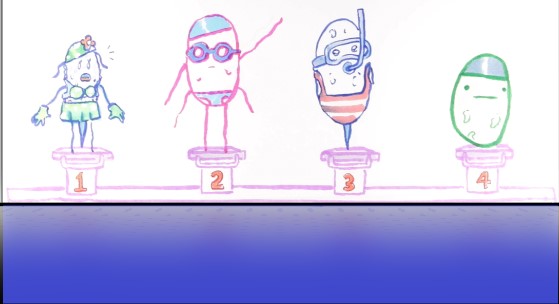 A partnership work among Chilean and Argentinian researchers is reaching important advances in the study of a bacterium that nourishes legume roots. This study intends to make them swim in a more efficient way to convert them into effective biofertilizers for agriculture.

When we talk about bacteria, we often think about diseases, infections, and even death. But there is a lot of bacteria that are beneficial for human beings as well as different ecosystems. One of them has become the focus of a study by a group of scientists from the Millennium Nucleus Physics of Active Matter, in Chile, and from the Universities of Córdoba and La Plata, in Argentina. This group of scientists is unraveling the Bradyrhizobium diazoefficiens bacteria collective motion to turn them into efficient biofertilizers for agriculture.
The Bradyrhizobium diazoefficiens are soil bacteria that coexist with the soybean plant and capture nitrogen from the air and takes it into its roots: “They use the nitrogen (N2) to produce composites, like ammonium (NH4), that nourishes the plant. That is the reason why these bacteria are used as plant fertilizers”, explains María Luisa Cordero, Doctor in Physics and Alternate Director of the Millennium Nucleus Physics of Active Matter (DFI-FCFM University of Chile).
Nevertheless, this natural biofertilizer is not always efficient in its “trip” to the roots. Sometimes it gets lost while is swimming in the soil and does not arrive at its objective. “This is why, even though farmers use these bacteria, they also use chemical fertilizer to provide nitrogenous substances to the plants”, says María Luisa Cordero.
So, how to make their swim more efficient? The solution to that agricultural problem may come from physics. Physics contribution
The partnership investigation among Chilean and Argentinian scientists came up in 2014, after the visit to Chile of Verónica Marconi, Physicist from the University of Córdoba. “On that trip, I met Dr. Cordero’s microfluidics laboratory. When I saw her microchannels experiments, I thought those where the soils that we were been studying, only theoretically, up to that moment. Dr. Cordero could help us to design and build microdevices that imitate the intricate soils in which bacteria move, so we could directly observe them. That would give us a powerful tool to investigate in the laboratory these phenomena, that are still unknown, even when they are widely used in agriculture”, Says Marconi, who works since 2013 analyzing these bacteria dynamic.
After several conversations, they came up with the collaboration between both centers plus Anibal Lodeiro (La Plata University), Biotechnology and Molecular Biology Specialist, and leader of a group of experts in genetics of soil bacteria, and particularly, the Bradyrhizobium bacteria, which are widely used as biofertilizers in most of the soybean fields in Argentina.
Finally, the investigation team was constituted by the physicists Moniellen Pires and María Luisa Cordero from the Millennium Nucleus Physics of Active Matter (University of Chile), the physicists Verónica Marconi and Sofía Montagna (Córdoba University), and the biotechnology expert Anibal Lodeiro (La Plata University).
The investigation focus was to extensively understand how these bacteria swim and use their flagella systems when they are in the soil and help them to improve their efficiency as biofertilizers by suggesting better cultures inoculation systems.

How they swim
These bacteria are characterized by having two tails or flagella systems to move: one is thick in one extreme (subpolar), and the other is thin on the sides (lateral), and they only exist if there are certain environmental conditions.
To study their swimming system, physicists from the Millennium Nucleus built microfluidic devices that simulate a porous medium similar to soil. “We create microchannels of a few microns wide that are similar to the paths bacteria can find among the soil particles. Then, we inoculate bacteria inside these devices and we observe them under the microscope”, says María Luisa Cordero, Alternate Director of the Millennium Nucleus.
To understand which is the function of their flagella systems, scientists are experimenting with this bacterium’s four strains: the “wild”, which is the one found in nature, plus three mutant strains Dr. Lodeiro developed in his laboratory in Argentina. “One of those strains only produces subpolar flagellum, another one only produces lateral flagella and the last one does not produce any flagella. Using different strains, we are trying to determine in which conditions bacteria use one or another flagellar system to swim”, says Cordero.
Mollinien Pires, Postdoctoral Researcher from the Millennium Nucleus tells us about what they have discovered: “We have the preliminary results of two strains; we have characterized their swim strategies in one type of porous medium and we have obtained some parameters of their motility”.
María Luisa Cordero, Alternate Director of the Millennium Nucleus details: “We have observed the mutant strain bacteria that only has lateral flagella, almost does not swim, so we still have a big question; what these flagella systems are for? The wild bacterium with the lateral flagella plus the subpolar swims faster than the mutants that only have the subpolar. That means, somehow, lateral flagella help the bacterium to swim better, but by themselves are insufficient to make bacteria swim”.
To Marconi, the results of this investigation will be crucial for the sustainable agriculture, since if it gets known how these bacteria swim inside the intricated microchannels from diverse soils, it could be possible to know how they get into the root, in which soils they move better, etc. And the answers to these questions would help to improve them genetically. Why do we want that? Because if they can get into the root, they get benefited because they easily reproduce in a beneficial environment and the plant significantly improves the quality of its grains and production, due to these bacteria help the plant to fix the atmospheric nitrogen, which is poor in the soil. With more nitrogen as nourishment, it becomes possible a better production. This way, at least one of the necessary additives for the plant would be received from these “good bacteria”, and we would be able to avoid the use of other kinds of fertilizers not so environmentally friendly”, explains Marconi.

Microdevices
The microfluidic devices created for this investigation in the Millennium Nucleus Physics of Active Matter are coaster-sized with internal microchannels 10 micrometers wide (0.001 millimeters) and 25 micrometers high (0.25 millimeters).
The design of these microchannels seeks to simulate the soil pores, medium in which bacteria swim to get to the roots of the plant.