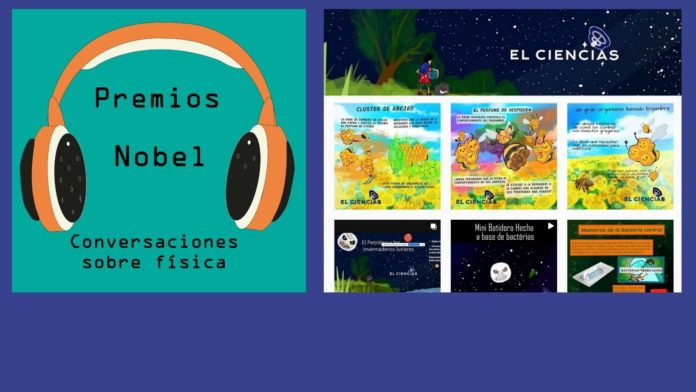 Podcasts of physics, created and produced by the Millennial Nucleus Director, Rodrigo
Soto, has already two seasons and seeks to reach teachers and graduates of the area to
update knowledge through interviews made to different physicists about Nobel Prizes.
The YouTube channel named “El Ciencias” is a channel in which Pablo Mardones
explains diverse physics subjects with animated videos created by himself.

It was not Covid19 pandemic, nor the boredom of quarantine. For Rodrigo Soto, Doctor in physics, academic of the Physics Department of the Faculty of Physical and Mathematical Sciences of the University of Chile, and Director of the Millennial Nucleus Physics of Active Matter, the communication of science is part of what he considers his job. This time, he went beyond the permanent divulgation projects of the center of excellence he
directs. He opted for creating a product of science communication of its own: Podcasts of Physics.Nobel Prizes: talks about physics, a program in which Doctor Soto interviews other physicists to explore, along with them, the Nobel prizes of the area. “The target audience is school physics teachers who have an advanced formation in physics and for whom the usual divulgation in media or massive talks is insufficient. The tone is a little bit advance than the general public. It was not made to be taught in schools, but it does serve as a continuous formation activity to keep up the most important developments, without treating the last topical subjects, but only the most consolidated- That is the reason why I decided to concentrate on the Nobel Prizes”, explain Rodrigo Soto.
Physics podcasts, launched in October 2020, are already in its second season of eight episodes available on Spotify and other platforms ( http://(https://podcastsdefisica.buzzsprout.com/) with subjects that go from exoplanets to neutrinos oscillations. The third season is now been recorded. “I choose this thematic because contingency news about science talks about topics like; the last cure for cancer, and it is not exactly like that. It is common to show a lot of innovation but little context and that leads to a gap. So, I intend to take modern and consolidate knowledge, like the Nobel’s in physics and focus on a less massive but still very important group like physics and science teachers. The idea is for them to update about topics that they surely did not see in their course tracks but are exciting and key topics to understand science and current technologies”.
Podcasts are fully created by Doctor Soto who, not only picks up the subjects but contacts the guests, prescript the interview questions, make the recording of the audio, and then the posterior edition. How has been this experience? “Very positive. I have really enjoyed it, I have learned a lot and, until now, we have had a very positive answer from the public.” Animated capsules
While he was finishing his doctorate in physics in the Millennial Nucleus Physics of Active Matter (DFI-FCFM), Pablo Mardones snatched the forced confinement of the quarantine during the weekends to give birth to “El Ciencias,” a YouTube channel where he uploads animated capsules about different scientific subjects and whose name is inspired in “The Jocker” (El Ciencias: https://www.youtube.com/channel/UCby2hkjjWC0PRpj69YeVz-w). “It seems to me that science in Latin America is like the crazy relative nobody wants to make responsible of and is left on its own,” he said.
Capsules are created, illustrated, and animated by Pablo Mardones, while his partner Pablo Olea is in charge of the recordings, social media, and live activities. “At this time, we have already talked about coronavirus, biotechnology, and spatial colonization. Even though we would like to enlarge our agenda, in the future, and incorporate more topics as we record more videos. We try to mainly use our illustrations to perform the animations, and I think that is the main seal of our channel, besides the black humor we use from time to time”, says Mardones.
It is not the first time this physics graduate disseminates science via YouTube; three years behind, he had a channel named “The Físico” that he created to support his job as an assistant and where he explained diverse concepts of the area with drawings and animations. “I see in the science divulgation a possibility of work in the future. I like it because it allows me to combine three of my favorite activities; to teach, to draw, and science.”
Currently, he is working on a series of 7 episodes about the extraterrestrial economy. He wants to use it to attract students from high school and university and start a program on Twitch. “El Ciencias folder comes full of crazy stuff. We are working to initiate a program on Twitch. The idea is to play video games and comment about various subjects, preferably scientific subjects, related to the history of the video game we are playing. There is also a series of videos about to come out on YouTube about the extraterrestrial economy. Spatial mining and agriculture are only the first treated topics. Then, we will keep making videos about the Martian energy supply sector and interplanetary transport until we are in conditions to talk about the colonization of Jupiter, which is, basically, the central axis of all the videos of the channel. Although all these topics are still in the project trunk, maybe in 2022 or 2023, we will be finally talking about Jupiter,” he comments.