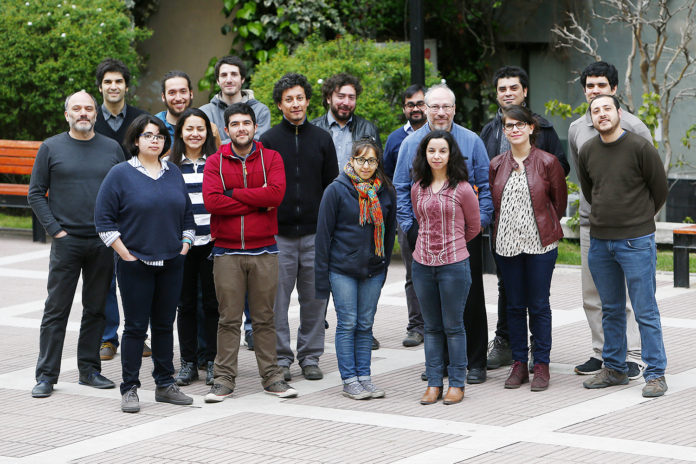 * Delegation included principal, associate and postdoctoral researchers and doctorate, and master students, who dictate talks and presented posters.
* At the event, Fernanda Pérez, from Millennium Nucleus, won the best poster presented by a student award.

During three days, Antofagasta city was the epicenter of the National Physics. Up to the capital of the Second Region, more than 300 Chilean and foreign physicists arrived to participate in the XXI Chilean Symposium of Physics 2018, an event organized this year by Universidad Católica del Norte and the Chilean Society of Physics.
The researchers from the Physical Millennium Nucleus of Active Matter were an important part of the meeting, being present with nine researchers and students, in a delegation led by the center’s Alternate Director, Ph.D. María Luisa Cordero.
On Wednesday, November 14th, the day was opened with the plenary talk of the expert in solar energy, Martin Green (from the New South Wales University, Australia), followed by more than 150 expert conferences, which in those three days were present at the event. Felipe Barra (associate researcher), Moniellen Pires (postdoctoral researcher), Francisca Guzmán (postdoctoral researcher), Gabriel Ramos (doctoral thesis) and Pablo Mardones (student) were some of them.

PRIZE
There were students also participating that day: Camila Horvath, José Rodríguez and Fernanda Pérez presented posters with their research, an activity in which more than 150 physics students from all over the country participated.
The best theoretical poster, the best experimental poster and the best poster of the event were awarded. The last one was defined by a commission of the Chilean Society of Physics (Sochifi) and was given to Fernanda Pérez, student at the Millennium Nucleus.
The symposium also included plenary talks by Laura Greene, expert in strongly correlated fermionic systems from the State University of Florida, United States. Bernard de Vit, expert in supergravity and particle physics from the University of Utrecht, Holland, and Eric Arnold Bergshoeff, expert in the unified theory of quantum gravity from the University of Groningen, Netherlands. Besides, the meeting opened spaces for discussion panels on the Science 2030, Project and the Financing of Science and the Ministry of Science and Technology.

TALKS AND POSTERS OF THE NUCLEUS