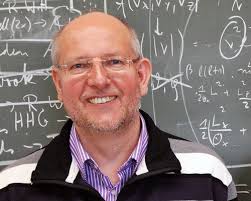 Hartmut Löwen, professor and researcher at the Heinrich-Heine University, Germany, is one of the most important scientists in the study of active matter in the Germany.

The German physicist Hartmut Löwen will be arriving to Chile this Friday. Professor and researcher at the Heinrich-Heine University in Germany, and one of the most important scientists in his country in the field of active matter; a relatively new area in modern physics that tries to understand the properties of all those systems composed of many individuals that move as if they were one, using the energy of the environment, such as swarms, schools, bacteria or colloids, among others.
“The active material is interesting because it can be used in applications to deliver medications in the body. The dream is to create a small submarine the size of microns that carry the drug through our veins without almost any external control and without destroying the tissue. It is also “intelligent” in the sense that individual particles can decide for themselves what they do, for example, hitting against a target. Synthetic active matter, such as self-propelled colloids, are important for the unanimous conduct of real-life systems, such as bacteria, sperm or algae, because they allow modeling certain facets of real life on the micron scale. Finally, active matter implies an unbalanced physics that is much more difficult than balance physics and is nested in the interdisciplinary world, at the interface between statistical physics, hydrodynamics, and biophysics. That is why studying self-organization in active matter is also important from a fundamental physics point of view,” explains the expert from Germany.
Theoretical physicist Lowën is the Director of a research team of more than 50 scientists in Germany and, since 2014 he has more than 9,700 citations to his research, according to Google Scholar.

Activities in Chile
Hartmut Löwen arrives at our country invited by the Millennium Nucleus Physics of Active Matter, a center of excellence of the University of Chile. The German physicist has a close scientific collaboration with this center, because of joint works, especially with the researcher of the Nucleus, Francisca Guzmán. “Francisca was my postdoctoral researcher and we published an important article in Nature Communications about magnetic microswimmers in 2016 and a recent study in Physical Review Letters (2018) on biofilms. During my visit, we will discuss other joint projects. With Rodrigo Soto (Director of the Millennium Nucleus) we have common interests in active colloidal molecules and we will plan future joint research as well.”
During his visit to the Millennium Nucleus – the first in South America – Lowën will dictate the seminar “Physics of self-propelled colloids and microswimmers”, next Monday, January 14, at 2:30 p.m. in the Physics Department of the University of Chile (DFI), Beauchef 850, in the East Seminar Room (third floor DFI). Intended for researchers and physics students.
Tuesday, January 15, meanwhile, he will dictate the talk “Passive and active colloidal particles in complex environments” within the framework of the Active Breakfasts that every Tuesday of January the Millennium Nucleus offers at 9:30 for students of
the Faculty of Physical and Mathematical Sciences of the University of Chile.