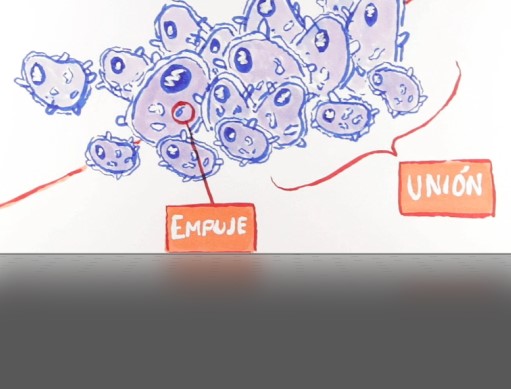 An interdisciplinary team from the Millennium Nucleus Physics of Active Matter is currently working with zebra fishes and annual fishes to understand the mechanical forces that influence the cell movement. This would allow them to know more about the development of a living being, how the body can heal a wound, and how cancer can spread.

All animals, including humans, come from one single cell that divides itself to create other genetically identical cells. Little by little, they start to differentiate themselves to form different organs and tissues, like the heart, lungs, skin, or bones. To accomplish this, cells need to gather, organize, and move to specific areas of the developing body to form those organs and fulfill its function.
How and why they move? The answer to those questions will allow us to understand in detail how a living being forms. This, used to be labor linked to biologists only, but, nowadays, physicists have a lot to say about it too.
“Cells do not move by themselves in the space. They lean on other cells, tissues, and extracellular matrix to move by exerting force to push and move. Those forces generate different deformations and reactions of the whole. From there, physics can help to characterize, measure, and comprehend how these forces act and how the environment reacts. The mechanical analysis of the cell movement complements the purely biological analysis and there is a whole working area named mechanobiology in which physicists and biologists work together”, explains Rodrigo Soto, Director of the Millennium Nucleus Physics of Active Matter.
This is the reason why physicists and biologists from the Millennium Nucleus have gathered to work with zebrafishes and annual fishes. These animals have the advantage of having transparent embryos, so researchers can see all the cell movement during their evolution. What have they found?

Findings
Until now, the interdisciplinary team in charge of this investigation, have detected important findings.
Susana Márquez, Master in Physics from the Millennium Nucleus and the biologists Miguel Concha and Eduardo Pulgar, from the University of Chile Medical School, have found which are the mechanical forces that act in the middle of the development of an organ causing the cells to migrate or move to other areas. For that purpose, they studied the zebrafish, an animal that has an organ, named Kupffer’s vesicle, that develops in a very early stage. This organ is formed by a group of a few cells that are transported from one side of the egg to the other side. Scientists realized how important it is to lose as little cells as possible during this “transport” since, otherwise, the organ will not be formed. “We have understood which forces are the ones that act causing the cells to migrate. They are pushed by a superior layer, but, at the same time, they gather to go to their destiny. What we show is that any of these forces per separate is enough to make this movement happen. Thrust and gather, must act together”, explains Soto.
In another investigation, physicist Néstor Sepúlveda from the Millennium Nucleus and the biologists Miguel Concha and German Reig studied the annual fish and realized that a group of cells -very important for the subsequent development of the fish- uniformly distribute on the egg’s surface. How they do that? They discovered these cells locate on the edges of other bigger cells that act as efficient carriers.
But what makes these cells to place on the edges of bigger cells? Another investigation performed by the physicists of the Millennium Nucleus Rodrigo Soto and Susana Márquez, and the biologists Miguel Concha and German Reig answered this question. They discovered the edges of the cells tend to be tenser and, by the effect of the mechanical forces, the migratory cells often place in these tense areas.

Impact
Which is the importance of this knowledge? First, besides learning more about how a living being is formed, and all the implications this event has, these investigations can help to better comprehend some of the diseases associated with the malformation of organs. “Some organs don not develop correctly, or do not have the proper form or size, and is possible this happens, for example, because in its formation not many cells, as it was necessary, get to the right place”, explains Soto.
Second, this knowledge also allows them to understand the healing process of a wound, instance in which many cells migrate to the injured zone to repair the damage. “This migration, or directed cell movement, can be facilitated or blocked by several factors and, understand those factors is the key to help to cure a wound even faster”, explains the Director of the Millennium Nucleus.
And third, having more knowledge about how these cells movement, could give new answers about cancer, since it is been discovered that, in the origins of this disease, there is a process with a mechanical component which causes carcinogenic cells to change their physical properties and respond in a much more sensitive way to the changes in the rigidity of the tissue. “We have discovered that if cells with oncogenes remain in a mechanophysical environment equal to the one they belong, they do not develop malignancy but, on the contrary, if they remain in a rigid mechanical environment, they will. In a rigid environment, there are also more mutations, and cancer spreads faster. Mechanics could help us to intervene in the future by understanding how to avoid the origin of cancer and its propagation and manipulate the mechanical environment of the cells and their tissues”, explains Miguel Concha, Professor at the Medical School of the University of Chile and Research Associate of the Millennium Nucleus Physics of Active Matter.

New Study
Millennium Nucleus is conducting a new study about cell movement, led by Fernanda Pérez, Ph.D. student, who is working with annual fishes to see how forces get spread in a tissue.
Pérez is studying a very particular process in which a few cells shrink a little for a short period. “She is analyzing how the whole tissue responds to that, which allows her to understand how the forces get spread. Besides, Fernanda is verifying if the proposed models that seek to describe these tissues are indeed correct”, explains Soto.